The Supreme Court has ruled that carrying a loaded firearm outside the home is a Constitutional right, and state laws that prevent citizens from doing so violate the 14th Amendment.

This case originates in New York, where possessing any firearm requires a license. A “restricted license” permits possession of a firearm inside your home and gives you the right to take the weapon outside the home for purposes of hunting or target shooting. To obtain this permit, the applicant has to show a “licensing officer,” usually a judge or police officer, that they have “good moral character,” no history of crime or mental illness, and that “no good cause exists for the denial of the license.” Carrying a weapon outside the home for self-defense requires an “unrestricted license.” To obtain that license, you must convince a “licensing officer”  that “proper cause exists” for it to be issued. In either case, there is virtually no appeal possible of an adverse decision, and your right to keep and carry a firearm is subjected to the whim of a bureaucrat.

By a 6-3 vote, the Supreme Court declared that exercising your right to carry a weapon for self-defense does not depend upon your ability to convince some petty bureaucrat that you have “proper cause.”

New York State Rifle and Pistol Association vs. Bruen by streiff on Scribd

The truth about the “proper cause” doctrine that prevails in the District of Columbia, Hawaii, Maryland, Massachusetts, New Jersey, and New York is that they effectively prohibited concealed or open carry of weapons, and there were no means available to protest decisions that didn’t involve spending tens of thousands of dollars in legal costs. Even then, some courts, like the Ninth Circuit, were so hostile to gun rights that they felt comfortable literally overruling Supreme Court precedent. For instance, in March 2021, the Ninth Circuit made a point of saying that the District of Columbia v. Heller decision was bullsh** (see 9th Circuit Makes a Major Ruling That Puts Fundamental Gun Rights in Jeopardy). The Ninth Circuit’s refusal to acknowledge the Second Amendment was even parodied by one of its justices in an opinion, see Ninth Circuit Trump Appointed Judge Lampoons His Entire Circuit Over Its Treatment of the Second Amendment.

When the Bruen case was argued, it became obvious that adding three conservative justices had changed everything; see Supreme Court Conservatives Maul New York’s Restrictive Concealed Carry Law in First Major Second Amendment Case in a Decade. The decision released today, authored by Justice Clarence Thomas, makes it clear that this court does not consider gun rights to be some kind of novelty but a core constitutional right. Moreover, it called out the Circuit Courts, who have been inventing reasons to ignore the Second Amendment.

In Heller and McDonald, we held that the Second and Fourteenth Amendments protect an individual right to keep and bear arms for self-defense. In doing so, we held unconstitutional two laws that prohibited the possession and use of handguns in the home. In the years since, the Courts of Appeals have coalesced around a “two-step” framework for analyzing Second Amendment challenges that combines history with means-end scrutiny.

Today, we decline to adopt that two-part approach. In keeping with Heller, we hold that when the Second Amendment’s plain text covers an individual’s conduct, the Constitution presumptively protects that conduct. To justify its regulation, the government may not simply posit that the regulation promotes an important interest. Rather, the government must demonstrate that the regulation is consistent with this Nation’s historical tradition of firearm regulation. Only if a firearm regulation is consistent with this Nation’s historical tradition may a court conclude that the individual’s conduct falls outside the Second Amendment’s “unqualified command.”

Along the way, they also observe that you can hardly have a right to “keep and bear arms” unless you can carry them outside the home.

Nothing in the Second Amendment’s text draws a home/public distinction with respect to the right to keep and bear arms, and the definition of “bear” naturally encompasses public carry. Moreover, the Second Amendment guarantees an “individual right to possess and carry weapons in case of confrontation,” id., at 592, and confrontation can surely take place outside the home.

They summarized their opinion in this way:

The constitutional right to bear arms in public for self-defense is not “a second-class right, subject to an entirely different body of rules than the other Bill of Rights guarantees.” McDonald, 561 U. S., at 780 (plurality opinion). The exercise of other constitutional rights does not require individuals to demonstrate to government officers some special need. The Second Amendment right to carry arms in public for self defense is no different. New York’s proper-cause requirement violates the Fourteenth Amendment by preventing law-abiding citizens with ordinary self-defense needs from exercising their right to keep and bear arms in public.

I’m not enough of a naif to imagine this is the last word. The same people who gave you COVID lockdowns and police breaking up funerals will continue their fight against liberty. 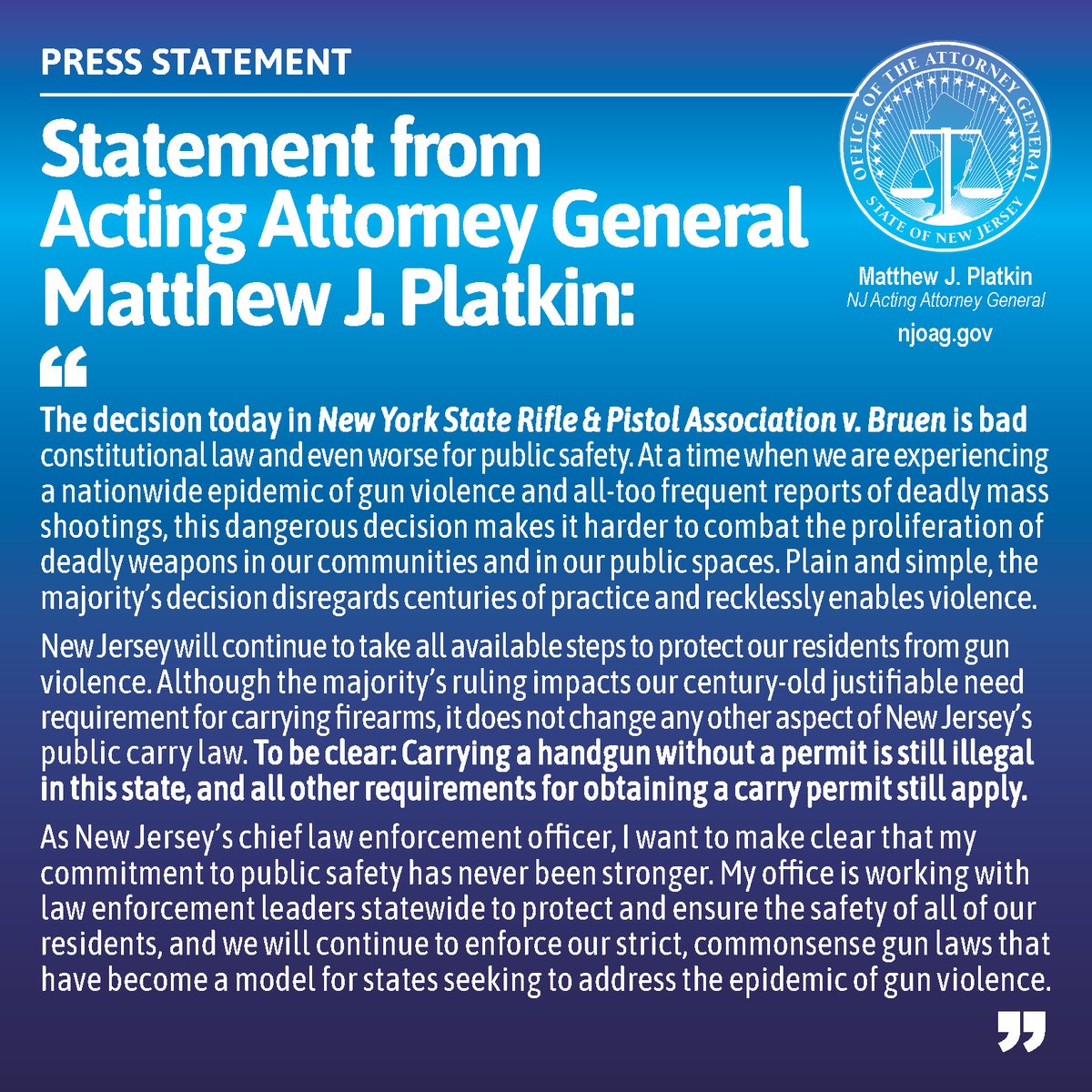 That said, I do think the tide has turned decisively against the people who would restrict the right to self-defense to those rich or powerful enough to afford bodyguards or have them furnished by the taxpayers.